Want to Reach a Journalist with Your Pitch? Make Sure You Are Reading/Watching Them First

Seven journalists from the greater Seattle area recently shared a bevy of tips and insights about how they work, how they like to be pitched, and what drives them crazy. Many of those tips are included below … but I am well aware of the ever-shrinking attention span and am willing to bet you are not going to read all the way to the end. I don’t think you can do it. Prove me wrong. I dare you!

In case I’m right, I will put the biggest takeaway from Business Wire’s June 27th “Meet the Media” Luncheon right here at the top: If you want to be successful in pitching local media, you need to personally consume that media. Pretty simple, eh? Every single journalist at our event mentioned that the most effective pitches come from people who know what they write about, know what they report on, and know what they are interested in (from following their media social accounts). If you “know” the reporter and know what will be of interest to them, there is a much higher likelihood your pitch will be successful … mainly because you won’t send them irrelevant pitches. Also, putting your news releases out via Business Wire is wildly effective!

Don’t believe me? Hear it from the several of the media members who gave their time and wisdom to the 80-plus in attendance. 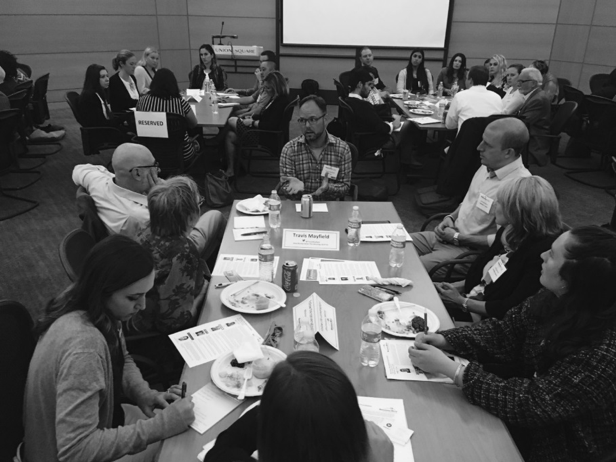 One of the first things out of Travis Mayfield’s (an anchor and host of Q13 Fox’s This Morning) mouth was, “Watch my show! You’ll learn all about me. I’m the dorky dad on the show and smart PR people know that and pitch accordingly.” Mayfield also noted that when you do pitch him successfully and he says yes to your story idea, you better be ready to pounce. “There is nothing that drives me as crazy as when I say yes to a pitch and then the person who pitched it is nowhere to be found,” he said (while shaking his head solemnly). “I simply don’t have time to wait around … if you miss your window, it’s bye-bye and on to the next story.”

Cambria Roth, an Assistant Editor at Crosscut, gets a lot of story ideas from readers of the publication. “Being an avid reader is really important. Consuming a lot of media and knowing what publications write about is so critical to being successful on a pitch … especially for Crosscut. We are looking for local stories with a lot of depth, and you will know that if you read us.”

Garrett Rudolph, editor-in-chief of Marijuana Venture Magazine, said no method of pitching (Twitter, LinkedIn, email) is frowned upon, but that he generally prefers email. “I very rarely ever read a full email. If I haven’t gotten the point within one or two sentences, I’ve moved on,” he said. He also added that while he doesn’t open every single email, he does give a cursory look at every subject line – so it’s critical that the subject catches his attention.

“I’m always looking for something that’s unique or informative in some way,” Rudolph said. “The cannabis media isn’t really that big, so we kind of all know each other and we know all the other publications out there. I don’t want to be publishing the same thing that my competition is. Does this pitch feel like something that was sent out to five different magazines and slightly twisted to fit each publication? Or is this something that was catered to me and if I invest my time and energy in (and space in the magazine) is going to be interesting for my readers? That makes all the difference. And if you have read the magazine you’ll know what might be unique or special for us.”

Other Things to Consider

• Almost every journalist preferred to be pitched (or at least initially communicated with) via anything other than the phone … Twitter was the most popular method, as @gastrognome Naomi Tomky joked:

• Brooke Pinkston, an assignment editor at KIRO7 (television), is always looking for emotionally charged stories. She also noted that guest segments can be booked from 12 hours to a week in advance.

• Casey Coombs, a veteran journalist at the Puget Sound Business Journal, won’t just cover any start-up … he needs things like revenue figures from the previous year, the people involved, where the company is, what their long range goal is, etc. The more detail you can bring to him, the more likely he is to consider doing a piece about a start-up.

• Venice Buhain of the Seattle Globalist says “How To” stories are ever popular and that she appreciates learning about an event as soon as the details are available. The more time they have in advance, the more time they have to allocate resources for the event. She also said, “Timing is everything … you never know what we might cover on a slow news day.”

Well, you made it to the end. I’m proud of you. And I hope you picked up a couple of tips along the way that will help you in your journey to the perfect pitch.