A survey recently found that nearly six of 10 Twitter users use the social networking site to keep up with breaking news. The use of Twitter as a news source increased from 55% to 67% for users under 36, and from 47% to 59% for users over 35.

Are you tweeting your press release? If not, you are missing a great opportunity to expand your reach and brand. After all, your Twitter followers are following you because they want to learn more about your business.  This is the perfect audience to activate by sharing your news.

If you are tweeting your press release, then consider the following questions: Are you tweeting at the right time? Are you including multimedia in your tweet to increase visibility and shares? How did you craft the Twitter version of your news release headline? Did you use hashtags? How many? How did you choose your hashtags? If you haven’t asked yourself these questions, then now is a good time to start working on your strategy to use Twitter to amplify your next press release.

Here are four ideas to get you started.

Your press release headline may be amazing for the newswire, but chances are you will need to make some modifications for it to rock on Twitter.

Write several tweets
Twitter is a real time, news distribution service. You will need to share your news many times to ensure broadest reach.  News releases and subsequent news coverage should be shared as many as 15 times or more to activate your entire audience.

Make your news release tweet interesting
This is a fantastic opportunity to speak directly to your company’s end user. Use your Twitter headline to highlight key points directly of interest to each of your various audiences.

Make it shareable.
Help your followers retweet easier and faster by leaving them enough space to promote your brand.

Twitter allows you 140 characters, but you want people to share your tweet. Consider crafting 96 character tweets to be able to include links (22 characters, regardless of length of link) and multimedia (also 22 characters)

Testing. Testing.
You have an idea about the length, but now what about choosing that headline? Sometimes it can take a little practice and you may have to do some testing.

Buffer outlines the A/B experiment where you write and tweet two different headlines at least one hour apart. Then you compare the data and responses and choose which headline performed best.

Optimize.
Some keywords garner more attention than others, and you should use popular keywords that are relevant to your news. If you want to do a bit of competitive analysis and Twitter research, check out what keywords your competitors or industry influencers are using by taking a peek at their Twitter feed. Is there a recurring keyword that you see appearing in retweets? Try it.

There are many resources available to help you find the most popular words to use in your Tweets and headlines. You can find extensive analytics to boost your SEO and a good place to start is Twitter.

Call to action:  Just ask.
Assert yourself and ask for what you want.

There are a myriad of studies analyzing the best times to post on social media. First, you must identify your demographic so you can choose the best time to reach it. You can be as broad or as specific as necessary. For example:

In general, Patel says the best time of the day to tweet is 5 p.m. The peak times for CTRs are 12 p.m. and 6 p.m. SurePayroll  highlights the best, peak and worst times to tweet:

Their advice? Schedule tweets for lunchtime when audiences have time to consume your news.

Considering these factors will help you choose the best time to reach your followers and potential followers.

3. Use Your [Multimedia] Assets

To do this, after you compose your tweet, click Add Photo. Your thumbnail image or filename will appear as an attachment. This is a real chance to maximize on the opportunity to include an image because you can add up to four pictures.

To add video, follow the same steps and then select the 30-second clip you want to emphasize in your tweet.

Ideas for good Twitter images
Hootsuite gives great examples of Twitter images that get shared. Here is a short summary of their tips:

File size:  Photos can be up to 5MB; animated GIFs can be up to 3MB (Your file will be automatically scaled for display in your expanded Tweet and user gallery.)
File type:  GIFs, JPEGs and PNGs are accepted; BMPs and TIFFs are not.

Tip: To achieve even greater visibility, you can make your image tweetable. There is a good set of instructions here.

4. Hashtags: Do Your Research

Why should you add hashtags to your Tweets?

Think of a hashtag like a label or filter for your topic. The goal is for as many people as possible who are interested in that topic to see your tweet and hopefully share your news. Reporters frequently use hashtags to view the entire discussion on a particular topic, a great way to see what consumer sentiment is before crafting coverage pieces. To exponentially expand the reach of your communication, you should be using hashtags with almost every tweet. 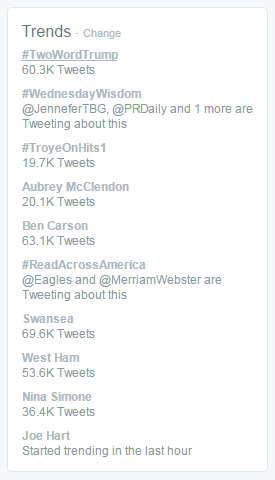 There are plenty of tools you can use to research, analyze and manage hashtags, but the easiest way to see what’s popular is free! Start with Twitter and look at “Trends” and “Moments.”  Those topics are insanely popular at the moment, so if you see something that is relevant to your news, use the hashtag to expand your reach.

If trending hashtags are not relevant, is your news about a particular theme? If so, add them in to allow reporters and interested parties to not only see your news, but understand the larger impact and context.

By following the above steps, you are increasing the visibility and impact of your news release. You are now armed with tools to increase your ROI by posting your news release on Twitter.   Do you have any tips for increased engagement on Twitter? Share them in the comments below, we would love to hear them!

News Optimization Quantified: Measuring the impact on your ROI

How the Paris Climate Agreement Impacts CSR and the Private Sector